12/30: More thoughts about a tracheotomy

December 30, 2007
I wrote an email to a Dr. today and I wanted to share some of the contents about our thoughts on a Tracheotomy procedure for Emily.

Early in the AM on 12/26 Emily was reintubated. She had been doing incredibly well on biPAP, but seemed to be experiencing some swelling in her lungs and her secretions were getting very thick and gummy. Her "end titles" were getting worse, so her blood was becoming acidic. So, she was reintubated and we think it was the right thing to do. They called in the attending Anesthesiologist and the head of ENT b/c of her difficult airway and the Anesthesiologist was able to place her tube. After the procedure, which was not bad b/c it wasn't as emergent as when we were admitted, the attending expressed his concern over Emily's airway and discussions about a tracheotomy. Later in the day on Thur, 12/26, the PICU attending and the Chief of Pediatric Pulmonology spoke with us at length about the concern and were encouraging a trach for three main reasons:
I have been thinking A LOT about this b/c it is obviously concerning. However, these are my thoughts and reactions to the news.
So, we have decide not to trach Emily and we have requested a transfer to Wisconsin to see Dr. Schroth so Emily's airway can be seen by someone who sees SMA airways on a regular basis. Emily's anatomy COULD warrant a trach, but my hunch is that she is typical, but I can't make a decision for OR against a trach unless I know from an SMA expert that Emily's airway is a disaster or not. First and foremost, we feel that Emily will have the best chance for a successful extubation and recovery at the University of Wisconsin Children's Hospital since they are intimately familiar with SMA needs, SMA airways, and the NIV protocol. I want to know, for sure, that Emily's airway is as I suspect, typical for an SMA child.

Hopefully this documentation will help other families brought into the same discussion by medical professionals.

Anonymous said…
Our prayers are with you every day. We are here for whatever it is that you need. Whatever it is.

Sky said…
Best wishes in your transfer and getting a SMA doc to look at her I will keep you all close in our prayres as always!
21:22

Anonymous said…
Nate,
I am so glad that you got through to Aetna and that you are able to talk with them about the transfer. We continue to pray that God will provide all that is necessary for Emily's care, and that she will quickly recover from the RSV.
Steve
10:27

Eileen said…
Nathan and Diana,
You are doing such an amazing job advocating for Emily. I admire your persistence and fight for what you feel is best for her! I would tend to go with the thoughts of the doctors, but you have educated yourselves so well and I am so happy that you do not rely on whatever they say and that you do what you know is right for your child. That is how she got to be 2 1/2 without all of there help! Hang in there! I know this is so tough, but you are both amazing and I know you can make it through this too! Love and prayers,
Eileen and Bob
12:36 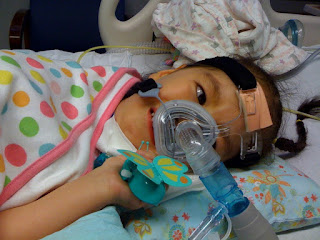 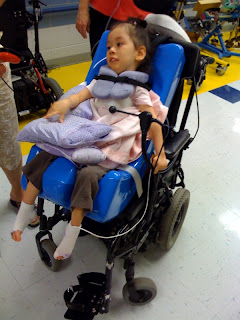